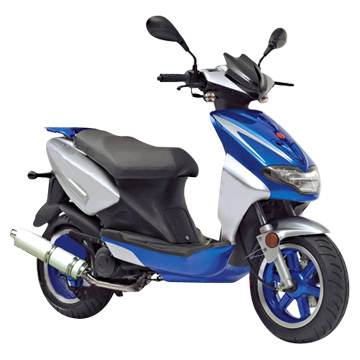 Benefits of a 50cc or 125cc motorcycle
When you’re travelling around a busy city like London, you’re likely to save time and money, as well as your sanity, by choosing a motorbike over a car. However, did you know that you could travel with even greater ease and convenience by earning your CBT licence and purchasing a 125cc motorcycle? We’ve put together this list of five issues, which all suggest that a 125cc moped could be the vehicle of choice for you if you’re frequently travelling across London.

Manoeuvrability
Whether you choose a 50cc moped, 125cc motorcycle or a larger motorbike, you’ll always encounter opportunities where you can weave between cars in a traffic jam, shaving minutes off of your journey. However, in cities like London where gaps are tight and drivers can be hostile, if you gain your CBT licence and invest in a 125cc moped or small 125cc motorcycle you’ll fit through those smaller gaps where a larger 500cc model wouldn’t. This means less time spent waiting at traffic lights and crossroads, and more time doing whatever you actually set out to do.

Inexpensive licences
You can expect to pay around £100 for training and CBT licence, compared to potentially upwards of £500 for a full DAS motorbike licence, depending on your experience as a rider and the amount of training required. For those who require an inexpensive method of travel, a 125cc motorcycle or scooter is the best choice. After gaining you CBT licence you could then go on to complete your full motorcycle licence, although it isn’t necessary – you can ride a 125cc bike with L plates with only the CBT training completed.

Short training
For a full DAS motorbike licence, depending on your experience with 125ccc or larger bikes, you may need several days of training. You may be required to demonstrate good knowledge both in the centre and on the roads, especially if you’re not used to using geared motorbikes. Conversely, the CBT licence training consists of on-site and on-road training and riding; including Highway Code, emergency stops, basic maintenance and advanced road manoeuvres, all in a single day.

The cost of fuel
We‘re all aware that the war on terrorism and diminishing supplies have sent the cost of fuel skyrocketing, with the days of a litre costing less than £1 long gone. However, did you know that you could save considerably just by choosing a 125c motorcycle or moped instead of a larger motorbike? The small but efficient 125cc engines mean that you’ll be filling up less frequently, and therefore paying out less. While a moped or scooter may not have the power which a 500cc motorcycle does, in busy city setting like London you’ll rarely have a chance to hit top speed regardless. Conversely, driving in London is likely to involve frequent starting and stopping, which can lead to heavy fuel consumption in larger, less efficient motors.

Tax and insurance
As well as fuel, you’ll also save money on your tax and insurance by achieving your CBT licence and riding a 125cc bike. Tax for a 125cc motorcycle is only £17 per year, compared to £57 for a 500cc model and £78 for more powerful bikes. A 125cc moped will also cost less to insure, as insurers will consider the price of any future damage, as well as the increased potential for accidents which comes with a more powerful engine, when calculating a quote. As a 125cc motorcycle or 50cc moped is less expensive and less powerful than a larger motorbike, you’ll have to pay much less.

So, if you frequently travel across London, why not invest in a 125cc motorcycle? Even if you’re a current 500cc rider, have you considered the time and money which you could save by switching to a 125cc model?